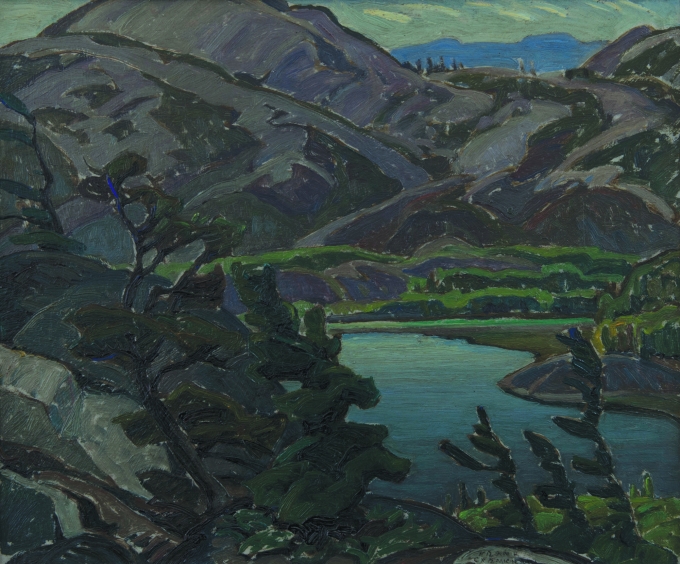 Franklin Carmichael, born 1890, lived the first twenty years of his life in Orillia, Ontario. His parents had immigrated to Canada from Scotland. They permitted him to study at the Ontario College of Art after he had worked in the family carriage business for a few years. In 1911, he started as an apprentice at Grip Limited, a Toronto design ﬁrm, where he met many of the other artists who would later become members of the Group of Seven. Carmichael travelled to Belgium to study at Antwerp’s Académie des Beaux-Arts in 1913, but was forced to return to Canada two years later with the outbreak of World War I. As the youngest of the Group of Seven he was always slightly set apart from the rest of its members. This separation increased following his 1915 marriage, which kept him from many of the longer sketching excursions undertaken by the others. Carmichael continued to paint on the weekends, beginning to use watercolours. By 1924, this became his main medium. The following year he and two other artists, A.J. Casson and F.H. Brigden, founded the Ontario Society for Painters in Watercolour. He shared a place at The Studio Building with Tom Thomson, beginning in 1914. When the Group of Seven transitioned to become the Canadian Group of Painters in 1933, Carmichael was a founding member. The previous year he left his post at Grip to take up teaching at his Alma Mater, the Ontario College of Art, where he remained until his death in 1945. 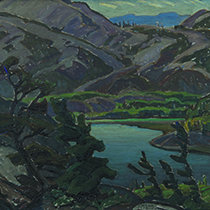