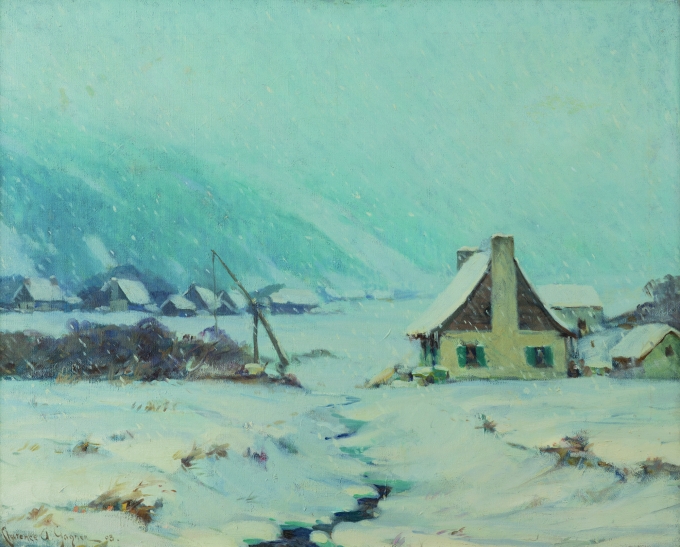 Clarence Gagnon is known for the peaceful scenes of winter landscapes and rural Canadian villages. He was born in Montréal in 1881. Gagnon was educated at the Art Association of Montréal by William Bymner. His work attracted the attention of James Morgan, one of Montréal’s most prominent businessmen and art patrons. Morgan provided funds for Gagnon to travel to Paris in 1904 and study at the renowned Académie Julian under Jean-Paul Laurens. Before his return to Canada in 1908, Gagnon travelled extensively throughout Europe, enthralled by Norway, Czechoslovakia, and the Balkans. Back in Québec, the artist divided his time between Montréal and Baie St. Paul, where he loved sketching idyllic scenes of landscape and villagers. Gagnon continued to travel to Paris and gradually became more established as an international artist, although he continued to paint images of his homeland. In 1919 Gagnon married Lucile Rodier, whom he had met when they were both students at the Art Association of Montréal. Three years later Gagnon was admitted into the Royal Canadian Academy of Arts, and in 1923 he received the Trevor prize from New York’s Salmagundi Club. From 1924 to 1936 Clarence and Lucile lived exclusively in Paris, travelling to Norway each summer for a few months. During this time, Gagnon completed illustrations for  two novels set in Québec’s pioneer days; Le Grand Silence Blanc, written by L.F. Rouquette, published in 1928 and the reprinting of Louis Hémon’s Maria Chapdelaine, published in 1933, for which Gagnon painted 54 works. In 1936 Gagnon returned to live in Montréal. He died in 1942. 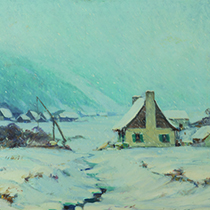